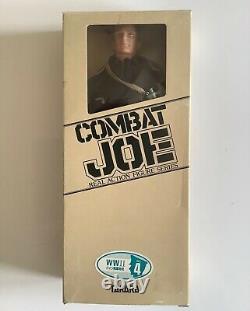 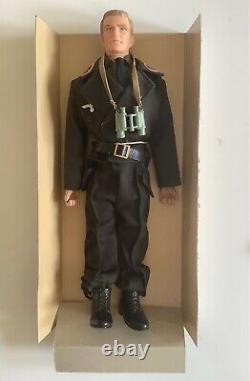 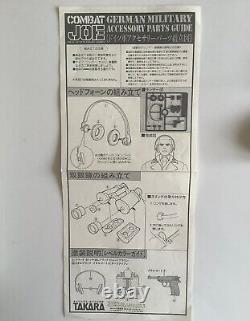 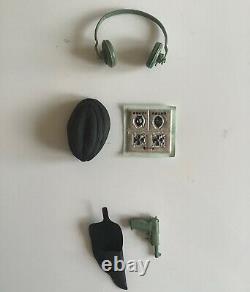 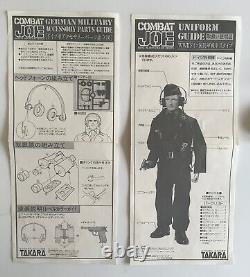 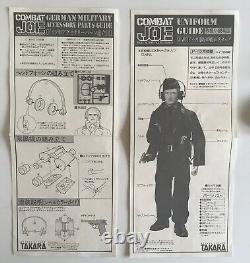 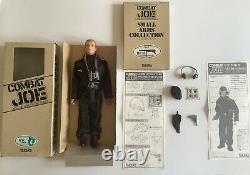 In 1980 Takara produced its last series of 12 inch Combat Joe Figures, again licensed from Hasbro which were aimed at the collector market. The figures featured Takara own head sculpts rather than the more common GI Joe head sculpts, and had bodies which were very similar to the talking GI Joes of the time the Takara figures were all non talking versions. The Combat Joe series eventually consisted of 3 boxed figures, along with 7 different Uniform, Accessory, and Small Weapon sets.

The first sets to be released in 1984 were A WW2 American Soldier, A WW2 German Soldier and A Modern US Soldier. These sets were quite'realistically' detailed for their day.

The joints are still firm, but the legs are a little loose at the hips. The Gripping hands are supple and grip well. The figure has a good clean head of brown painted hair.

I can't see any obvious paint rubs to the hair or eyebrows. The figures head is firmly attached to the figures torso, and articulates as it should. The figure is dressed in a German Tank Officers Jacket, Trousers, Short Boots, Cap, Belt, toy plastic pistol, pistol holster, Tank headphones, insignia.

The headphones band has been repaired. The figure comes with its original Japanese Information / assembly leaflets. The figure is in good condition and displays well. These figures are quite rare to find in the UK, and this figure would provide a nice addition to anyones action figure collection, offering a variation to the more usual Action Man and GI Joe figures of the same period.

I appreciate that collectors have different standards, so I have included plenty of photographs so that you can judge the quality and condition of this item for yourself and decide if this is the one for you. The United Kingdom Left the European Union on 1st January 2021. Please consider the above when making purchasing decision. Please see my other items. This item is in the category "Toys & Games\Action Figures & Accessories\Action Figures".